The Prague Jewish Community has a long and rich history that extends back to the 10th century. At that time Jews probably lived beneath the Prague Castle, in the area of today’s Lesser Town; in the 12th century at the latest they begun to settle down on the other side of the river, near the Charles Bridge. Over the centuries, their settlement grew into a Jewish Town (separated from the Christian part by a wall) with its own board of representatives, its own court system and extensive local government. The extraordinary significance of the community consisted – beside the number of its members and its material and cultural wealth – also in the fact that until the mid-17th century, the Prague community represented all the Jewish inhabitants of Bohemia in relation to the monarch and the state authorities. The destiny of all Jews in the country often depended on the destiny of the Prague community: the history of this community represents a substantial part of Bohemian Jewish history. 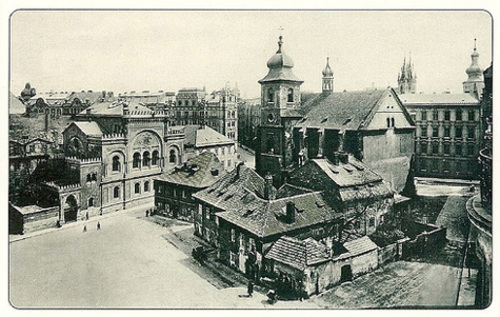 For centuries the Jews lived contained in the ghetto. At a time, it was the largest Jewish settlement in Europe. The institution of ghetto was abolished in 1848; a hundred years ago, the unique neighborhood was almost completely redeveloped; yet the fragment that remains belongs among the most precious Jewish monuments on this continent: with the largest and best preserved cemetery (the Old Jewish Cemetery, beginning of the 15th century), the oldest synagogue north of the Alps (the Old-New Synagogue, 13th century) and the other synagogues, the baroque Jewish Town Hall, the museum that, next to Jerusalem, is the most important and the richest in collections among Jewish museums all over the world. The names of hundreds of important persons   – rabbis, religious scholars, historians, philosophers, writers and artists – are bound with the Prague Jewish Community. From among all of them, let us recall at least one of the most educated Ashkenazi thinkers of the late Middle Ages, Rabbi YOM TOV LIPMAN MÜLHAUSEN (15th c.), the fabled philosopher, cabbalist and reformer YEHUDA LIVA BEN BEZALEL, called Rabbi LÖW or MAHARAL (end of the 16th c.), the great halachist YEHEZKEL LANDAU, author of Noda bi Yehuda (18th c.), as well as the writer FRANZ KAFKA.

Just like any other community, the JCP (Jewish Community of Prague) had its years of boom as well as its years of decline. We can place its Golden Age at the turn of the 16th and 17th centuries, above all the rule of Rudolf II (1576-1611). At that time, the economically strong and populous ghetto – called Em be Yisrael – was also one of the most significant Ashkenazi centers of education, more or less a capital of the diaspora. In Prague, well known Talmudic schools, yeshivas, dating back to the 11th century were active (their tradition extends to the 11.cen.), important scientific works and books were produced, since 1512, Jewish printing companies operated. The modern form of Chevra Kadisha was established here in Prague as well, to become the example for such institutions all over the Ashkenazi world. Rabbi ELIEZER ASHKENAZI (1512-1586) stood at its inception, together with MORDECHAI MAISL (1528-1601) - the Mayor of the Jewish Town, the court Jew and the financial officer of Rudolf II., the richest man in Prague, a sponsor and a builder of the ghetto - as well as the most important representative of the community spiritual life, Rabbi YEHUDA LÖW. From other significant personalities of this time we have to mention at least the mathematician, astronomer and the first modern Jewish historiographer DAVID GANS, and the physician, philosopher and astronomer JOSEF SHLOMO DELMEDIGO. All of them are buried on the Old Jewish Cemetery.

Again and again, the inhabitants of Bohemia were split by religious or national conflicts. The Jews always to decide which of the opposite parts to join and often they found themselves between the millstones. Another such situation came in the 19th century, in the period of so-called emancipation, when the Jews of western and central Europe threw away the chains of the medieval ghetto. Beyond the gates of ghetto, two nations were expecting the Prague Jews: Czechs and Germans. The Jews had to choose between them. The need to cope, somehow, with these two opposing forces, the need and the desire to join one of these cultures and languages – all that brought about burdensome circumstances and consequences, but not always and not everywhere. A strange symbiosis of three nations in a small Middle European space brought exceptional spiritual fruit, in German literature in particular. So called Prague German Literature represents a quite special phenomenon in the world literature. Many exceptional writers, Prague natives, belong among its mostly Jewish authors: FRANZ KAFKA, MAX BROD, FRANZ WERFEL, JOHANNES URZIDIL, EGON ERVIN KISCH and many others. Though their relation to the institution of the Prague Jewish Community was sometimes loose, their activity marks one of the most glorious epochs of Jewish Prague.

The Jews in Bohemia were given full civil rights only in 1867. Fate let them make use of these rights only for seventy years, of which mere two decades were in the democratic Czechoslovak Republic, where Jews enjoyed true freedom of life and work.  It is no coincidence that at the end of thirties Prague, besides Paris, became –the main haven for the (mainly Jewish) refugees, who tried to escape from Germany and the annexed Austria. However, in 1939 the Nazis occupied Prague, too. The biggest pogrom in the whole history of humankind was prepared – and the majority of Prague Jews became its victims.

No less than Jewish communities in other European countries, the Jewish community in Bohemia was always exposed to various degrees of religious, economic and even physical hostility. However, it needs to be said that until the Shoah, it never came to mass slaughter of the dimensions known from the German lands, Spain, Russia or Ukraine. Pogroms did happen even here: the biggest one in Prague, where on Pesach 1389 the ghetto was burnt out and 3000 of its inhabitants were murdered. Prague Jews were, together with the other Jews of the Monarchy, three times forced to leave the country: in 1541-64, in 1744-48 and in 1941-45. At the beginning of the World War II., 118 000 Jews lived in the territory of the Czechoslovak Republic. During the war, approximately 80 000 of them died in Nazi death camps. Their names are written on the walls of the ancient Pinkas synagogue in Prague. In Prague in November 1941, at the beginning of the deportations to the camps, there were 39 395 Jews – only 7 540 of them survived.

During the post-war years, many survivors moved to Israel and to other countries; another wave of emigration came after the Soviet invasion, in 1968-1969. At the end, approximately 12 000 Jews remained in Bohemia, with the largest community in Prague.